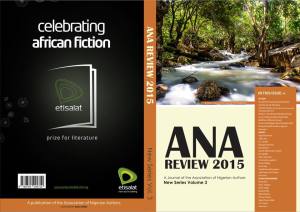 Editorial Note: A Summing Up By Richard ALI

Writing this Editorial is a historic undertaking for me, beyond the mere pleasure of it. It commemorates the anniversary of the Association of Nigerian Authors convention at Abuja, four years ago, when I was elected Publicity Secretary [North]. In the last four years, I have crossed this country—from Birnin Kebbi to Port Harcourt to Jos—in the service of Nigerian writing. I have also had my proudly Nigerian passport stamped at Nairobi, Entebbe, Kigali, Paris, Frankfurt and elsewhere in this same service, for which I dedicated my travels official and unofficial.

It is in consequence of this role in the National Executive Committee that the Editorship of this Review was thrust on me last year, when it was the pleasure and the vision of the ANA President, Professor Remi Raji, to further improve on the quality of this journal while building on work done by editors past. I have had the full confidence of the President, one of the few men I can willingly serve, and the EXCO in my work. It is from this confidence that I write my second, and my last, editorial as Publicity Secretary [North]. The present 2015 Convention is an elective one and I will not be standing for office.

My tested method of not soliciting entries beyond a public Call for Submissions has yielded the rich literary harvest on which you are about to feast. Some of the most talented young writers in this country have sent in stellar pieces of poetry and stories; we have also received entries, for the first time in a long time, from other African brothers and sisters in this fraternity of writing. Uganda. Kenya. Tanzania. South Africa.

Worthy of note, for example, are the images used throughout this Review, sent in by a Kenyan visual artist, Awuor Onyango [@awuoronyango on ‪#‎Instagram‬]. The cover image, following Victor Ehikhamenor’s powerful image of Soyinka’s lair in last year’s Review, was chosen from a massive oeuvre of Central Nigerian nature images by Musa Tukurah [@musatukurah on #Instagram] himself.

Musa Tukurah is an accountant-turned-photographer with one of the best eyes in the business at present. The aesthetic template for the ANA Review for the last two years, it is hoped, will continue to be definitive and influence subsequent editions in the New Series.

The quality of entries received has also gone up—of these we have selected the very best and the most representative. The present Review, at 307 pages, is thus a bigger volume than its predecessor.

Ahmed Maiwada is first among equals in Fiction with the story, KC and the Chemist—a well-executed tale of an Igbo pharmacy apprentice in Zaria after the Civil war, a story of ambition fuelled by society and of courage found in an unlikely place, ultimately a story of ruin. Another favourite short story of mine is Mekaria: The Ultimate Title by Richard Inya. In this story, Inya interrogates emphasis, using a coveted title and rivalry over it as material for his grander ambitions.

Uche Peter Umez is here represented by two short stories with very interesting twists both meriting a connoisseurs attention. One of the finest young writers presently writing in this country is Obinna Udenwe—his story here, Bedfellows, confirms his reputation and, in fact, adds to it. Fifteen short stories are sampled, sent in by young writers, predominantly male, including Pever X, Su’eddie Agema and Tohib Adejumo.

Thirty-two poets are collected here, with sixty-nine poems. These works capture a variety of themes and cover very many styles. Some of these poets, like Hyginus Ekwuazi, are well-known and celebrated while others are just getting their names out there. Abuja poet, Ehizogie Iyeomoan, has three poems including Fulani Boy; as does Scandinavia-based Kano academic, Sakky Jojo [Saka Aliyu]. New voices Ene Obada and Otene Ogwuche are also here with some of their very first poems. The one thing that brings together all these names is talent and interestingness.

Also published here are thirteen Essays and Reviews on books and subjects ranging from Wale Okediran’s Tenants in the House to late American poet, Maya Angelou. Playwright Isaac Attah Ogezi has sent in a review of Maryam Bobi’s new novella, Bongel, while Maik Aondona Ortserga takes on “Helon Habila’s Experimentation with our Mind-Reading Capacity: A Cognitive Reading of Measuring Time”. There is also a play by R. C. Ofodile, titled Onye Ocha, first performed in London during the 2005 Black History Month.

There is little more to say than thank you for the support over the last four years, and for the kind wishes in what is to come for me. The state of Nigeria, and of Nigerian writing, is one harried and tried yet one that stands strong still and is yet able to produce work of value. I entrust this Review, my arbitration of my Times, to your assessment and, hopefully, to your enjoyment and approval.