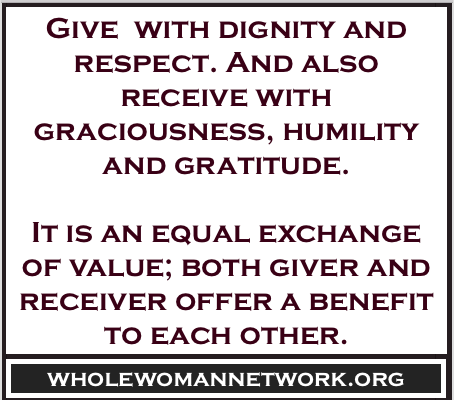 Re-thinking Our beliefs about Charity, Sharing, Respect, Dignity, and Honour, for all.

An adage says, it better to give a hand up than a hand out…and to that I add, “the poor” simply have less wealth than you, but they are NOT LESS THAN you! Stop treating people with disdain, as if they’re beneath you..

There’s no easier way of saying this: This is a full on, blown out rant about charities and their disempowering acts of giving to the vulnerable and poor, in a manner that actively or subtly strips the receiver of all shreds of dignity!

Okay, so let’s get to the trigger for my tirade. A few months ago, my ten year old was flicking between channels and stumbled upon a World Vision sponsorship advertisement. You’re familiar with them, right? They get a bunch of children from some under-developed nations, in really destitute environmental conditions and put a camera on them to share their ‘plight’ and ask for donations from the general public.

In this particular ad that my son was watching, the children had flies buzzing on them, on their sores and lesions, which were shown with the camera-man’s precision. They were very dirty, no clothes or shoes, had unkempt look, and they were smiling shyly into the camera….and my 10 year turned around, clearly trying to process what he was looking at and I braced myself because I thought he was going to ask me why the children were so poor and what we could do to support the organization.

I was visibly surprised when he asked a series of insightful questions in quick succession and he got more agitated (even angry as each question rolled off his tongue): “Why do they have to show the children with flies and with dirt? Why not clean them up and ‘kill’ all the flies so they do not get sick(er)?

Won’t people donate money if the children are clean and tidy? Are they making fun of children in Africa? Do the children know their pictures (with their tattered clothes and unkempt hair, ashy skin) would be shown in Canada to strangers? His litany of questions went on and on…a barrage that even I, was unprepared for!

I had an awareness of two things in that instant; I could never really pinpoint why I’d always felt more irritated that empathetic about these ads in the past. Truth be told, I often skipped through them, even though deep down I wanted to make a difference, something about the ads always seem to have push effect rather than a pull on me.

And these questions by my son was exactly why! I felt deep down (out of my conscious awareness, of course), that the whole set up stripped the children of their basic dignity. Some would argue that the images showed the dire strait of these kids and would elicit pity from possible donors. I beg to disagree.

(I actually have the same negative reaction when gory pictures are used for health-related fundraising, especially when there are no advisory warnings included). Do we really need to show pictures of someone (especially children), in their worst conditions in order to be ‘moved’ to donate to them?

A lot of us are all guilty of this disdain, this sad reality of denigrating  the under-served among us -akin to ‘throwing coins flippantly at beggars or the homeless,’ almost as if, to get them off our spaces. To me it extends to belittling people that ask us for help, stringing them along, instead of saying a firm & honourable yes or no…

Anyway, I digress. Back to the World Vision ad. A few days later, (that is, after the “inquisition” from my ten-year old), a really good friend of mine called me to rant about the same thing! Her experience was from a totally different organization but the same approach.

And of course we engaged in a “rant-fest” that lasted quite a while and when we quietened, we decided to sit down together and harness some creative energy towards presenting our points of view, hence this blog post! 🙂 We also sent a few letters to some organizations and spoke about it on different fora. We found it was a sentiment shared by quite a number of people but they had simply avoided talking about it.

And for the records, I love World vision, I think the work they’re doing is incredible and I hope in some way my questions help them do it even better. It was not until I attended a Joel Osteen event in Toronto and he featured World Vision as a charity of choice, that their message connected deeply with me, enough that I committed to a sponsorship package.

The difference in the PSA (which featured Pastor Joel’s brother), was that Joel Osteen showed how things  are, how they’re changing and how they could be. He told a complete story, and not just pictures/movies of the present sad situation (aka pictures of fly-invested children!) He did not tell a single story of these kids in developing nations.

These are 7 of the key points I shared on different platforms:

1. It is not just enough to give. Beyond what we give, WHY and HOW we give are probably more important. Give in a way that fosters independence and sustainability, not dependency/co-dependency or disempowerment. Give with dignity and respect. And also receive with graciousness, humility and gratitude. It is an equal value-exchange; both giver and receiver offer valuable benefit to each other.

2. A good example is the Children’s Hospital, Toronto. They deal with children who have disease such as cancer, rare hormonal dysfunctions…..and their advertisement appeal to people of diverse representational, information-processing systems.

The ads as they exist today, show children who are frail but of very cheerful disposition, in clean, sunny environments, who speak of their health challenges candidly, however with a focus on the vision they have of overcoming their various life-threatening diseases.

3. It is possible to show both sides of the coin? Show the problem and also show the solution. Tell a complete story; tell empowering stories about the effect of the donations on the participants, by showing the end game. Show examples of those who have benefitted and how it transformed their lives.

4. There’s been a shift from a linear economy to a more value-based, empathy driven economy and a good example of how this shift is reflected is in marketing of products, services and causes.

It is no longer an effective marketing strategy to show just the problems, in other words ‘stomping the heck out of their pain!’ Everyone is familiar with the existing problems. What seems to attract more interest and support is a singular focus on the possible outcomes i.e solution-centric approaches.

5.  For a lot of non-for-profits and charities such as World vision, Christian Children’s Aid Network etc., whose primary means of funding are through individual or corporate donations and sponsorships, developing and staying current with the changes in the fund raising world becomes really important.

This raises the notion of the ‘Empowered Giver‘ – People want to feel that they made a positive difference, beyond simply handing out an impersonal cheque. Show them the end goal, paint a compelling picture of where their support and resources (time, money, energy) is going to be applied. Show them the transformation and ripple effects their donations trigger, with specificity.

6. “Better to give a hand up than a hand out…” |”Let everyone sweep in front of his own door, and the whole world will be clean.” – Johann Wolfgang von Goethe

The sheer possibility of local churches, organizations and corporate institutions in developing nations adopting the world vision sponsorship model. This will have a direct, closer-to-home impact and challenge us in finding home-grown solutions to the prevalent poverty challenge we still face, in the midst of our touted ‘plenty’.

7: A need for more accountability and transparency; on the side of these donor agencies and more importantly, to hold both the leaders (Government) and citizens in the developing world, especially in Africa, to higher standards.

Ads like those of World Vision ought to compel all of us in Africa (at home or in the diaspora), to wake up to our collective responsibilities. It is a shame to see nations in Africa, with more than enough resources, simply squander everything away via greed, corruption and indiscipline, rather than use them for the needs and welfare of the people they were (s)elected to serve. And in turn, leaders and citizens, turn to the West for aids and handouts. These often come with invisible strings attached and we learn this much too late.

The result of these unchecked decades of corruption, is of course what we have now: neglected, unhealthy, unkempt children, whose pain and poverty become a spectacle in the public media space, and are stripped of basic dignity and respect.

In the end, beyond the endless, futile wait for mostly clueless leaders, perhaps it may serve us all well to play our part to curb the poverty within our own radius. We have a collective responsibility to ensure that children in particular, are given the right environment to grow and thrive. Cliche but very true; they are our only hope for survival; they are our best legacy, the leaders of today!

I’d like to end this piece with a reminder – A child is a child!

It doesn’t matter where they’re from -East, West, North, South. ALL children in our society DESERVE quality and accessible education/healthcare, safety from all physical, emotional and psychological trauma/abuse, good/healthy nutrition, an enabling environment to be curious, to express themselves and to thrive. It is our COLLECTIVE responsibility to ensure this becomes a reality, yesterday!

What are your thoughts? Share your comments right here on our blog or join the conversation on Twitter: @WWNetworkAfrica

Juliet ‘Kego|Follow her on Twitter: @julietkego
You may also find her on her Floetry Blog -www.julietkego.com

Juliet is the author of the upcoming book: ‘UN-Locking Your HeArt of Leadership.” Her vision is to raise a new generation of Transformational, Ethical & Creative African Leaders. Her mission is simply to engage, educate and empower WoMen & Youths, regardless of their levels of income or background, to return to ‘wholeness’ and live Healthier, Sexier, Wealthier, Daring & Meaningful Lives using Faith-based, Scientific and Universal (Common-Sense) principles!

She is an avid Life Connoisseur and a passionate advocate of WomEntrepreneurship, Leadership & Human Potential Development, Investment & Financial Literacy for WoMen.