The piece below was culled from the instagram page of HRH Emir Sanusi Lamido Sanusi [Muhammadu Sanusi II; Husband, father, grandfather, formerly Governor of the Central Bank of Nigeria, Serving as 14th Fulani Emir and Ruler of Kano]

“(Marriage of women (girls) below 18 years) – Women (girls) are suffering from reproductive health challenges because of such marriages. Time has come (for) the Muslim community (to) live by the reality of economic recession and consequences of early marriage.

The era when people gave out their daughters in marriage at early ages and asked the husbands to wait till they were ripe was nothing but a deception. Accordingly, the strategy no longer works as it has led to cases of divorce and other ugly situations.

In the past the rich and the poor married four wives and bore between 30 and 40 children because the economy was not only buoyant, but also because people were relying on government for sustenance. The harsh economic realities now make it impossible for people to feed twice a day these days. Unfortunately our people do not change and somebody with virtually nothing still gives birth to 20 or 30 children and this must stop!

Nigerian Muslims also practice the Malikiyas School of thought as these countries. We should follow suit and peg our own marriage ages for our own good. I urge the relevant authorities to create a law that would punish anybody that gives birth to children and allows them to suffer. Most of these neglected children not only turn victims of social vices but also engage in (or are coerced into) terrorism.”

WWN™ community commends HRH Sanusi for his advocacy on important causes and in particular, for his commitment to creating awareness about the scourge of child marriage, especially in Northern, Nigeria. Having open, respectful and fact-based conversations about these social issues are good places to start. Implementation of ideas can then follow as a matter of urgency.

Why is this statement by the Emir significant?

At WWN™, our approach to ending child marriage is hinged on a two-pronged strategy –
EDUCATION & ECONOMIC EMPOWERMENT.

The latter for the parents (especially for the mothers), and the former, for the girl-child. Through countless field studies, we have discovered that the more women are economically empowered, the LESS chances there are that they would need the girl-child to help them in income-generating economic activities such as farming, craft-making, trading/hawking. And as a result, the more the girl-child is educated and the less possibility of child marriage. Everything in intrinsically linked. Religion, Culture, Socio-political, Economic factors perpetuate child marriage. 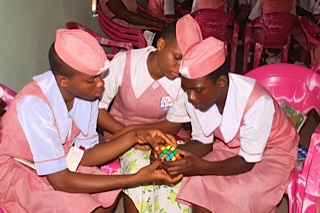 We believe that the more the notion of “schooling/education” is made relatable, practical, interesting and dynamic for both parents and students, the more willing they are to engage with the process.

Education curricula must be aligned to labour market and direct environmental needs [A huge part of our model was developed based on the successful strategy of the Malawian Chief and Child/Education Advocate -Theresa Kachindamoto].

Interested in ending child marriage? QUALITY #Education4ALL is a powerful tool. Engage in your communities and with your government -as a policy maker, mentor, donor, advocate, etc. In other words, become an Education STAKEHOLDER. Until we own it, we can’t fix it.

Your starting point could be something as basic as finding out the number of children out of school in your community/village, or visiting the schools in your community, engaging with teachers and students to find out their needs and barriers…

We all have a role to play. Education is one of the most pivotal tools for social re-engineering and transformation. Inclusivity in Education benefits every single one of us. #GetInvolved, today. Start by sharing the video below: “Child Brides in the North in their own voices” by WRAPA (Follow them on twitter on @WrapaNG)

**This advocacy video below was produced in 2016 by WRAPA Nigeria -the Women’s Rights Advancement and Protection Alternative and their partner organizations as part of their on-going campaign to end child and forced marriages in Nigeria.