Did I stop picking money? Nope. Another friend asked me to pick up her sprayed cash.

“Tell everyone that I’m the one packing money o,” I said, pulling my ear for emphasis. “Tell your husband and his people.”

I told her about what happened at Wedding 3.

“Don’t worry,” she said. “I’ve informed everyone. It’s just you and Esther who’ll pack my money.”

Okay. Everyone had been told. What could go wrong?

At the reception, the dancing began. Esther and I went to work. Then…. ghen ghen….

From nowhere, this young lady stepped onto the dance floor.

“Give me the money,” she ordered.

“No way,” Esther retorted. “Who are you?

I wondered the same.

The bride and groom were still dancing, oblivious. Next thing, I heard…

The girl had slapped Esther!

Before I could process that, I heard another…

Esther had returned the slap. She lunged for Esther, and a full drag out fight began right there on the dance floor. A few of the groomsmen rushed to the floor and separated the two women. The moment they were torn apart, the other girl, who by then had been identified as groom’s sister, made a beeline for me.

“Give me that money,” she barked, heaving.

Taking Esther as my role model, I said, “I’m not giving you jack!” I said. “Who the heck do you think you are to come barging in…”

I immediately received my own slap. I tell you, in that moment, I suddenly understood why Nollywood actors ask that seemingly ridiculous question. I honestly wanted to say, “You slapped me?”

By this time, the couple had stopped dancing and were asking what was going on. The guests gaped. In my shock, my grip on the money bag had slackened. Ms. Sister-of-the-Groom ripped it from my hand.

You’re probably thinking, why didn’t I slap her back? My people, two persons no fit craze at the same time. Besides, I was mortified on behalf of the couple. I walked off into the sunset.

Actually, I went to the buffet, got a plate of Jollof rice, and consoled myself. 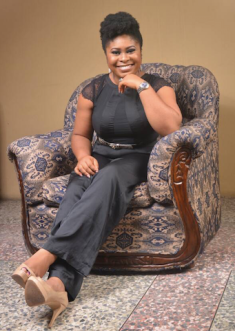 In her spare time, she loves to read, volunteer, cook up funny comedy skits, travel and learn new languages.