“‪Harper Lee showed us the beautiful complexity of our common humanity and the importance of striving for justice in our own lives.” ~ Barack Obama, USA President.

“In high school, Lee developed an interest in English literature. She dropped out of law in University of Alabama. After graduating in 1944, she went to the all-female Huntingdon College in Montgomery. Lee stood apart from the other students—she couldn’t have cared less about fashion, makeup or dating. Instead, she focused on her studies and writing. Lee was a member of the Literary honor society and the GLEE club. She was Truman Capote’s Research Assistant and Neighbour and helped him in his classic In Cold Blood.” ~ Source: Biography.com

Strange thing. When some people pass on in death, it is as if their death allows us to see clearly that everyone has a purpose here. Personally, I just think some people are simply immortal. They are here to share ONE key powerful story, book, poem, song, act of service, or raise our vibration, by sharing their truth, in a way that makes them live on forever…..

Harper Lee was one of those special ones; the rare breeds, I think. They show us how being great in the ordinary things can lead to a rich, extra-ordinary life. Rest in Peace, continue to cook up a storm in Literary heaven, Ms Harper Lee.

Some beautiful quotes from and about this brilliant and astute mind:

1. “Before I can live with other folks, I’ve got to live with myself. The one thing that doesn’t abide by majority rule is a person’s conscience.” ~ Harper

2. “You never really understand a person until you consider things from his point of view… Until you climb inside of his skin and walk around in it.” ~ Harper Lee

3. “Sometimes the Bible in the hand of one man is worse than a whisky bottle in the hand of (another)… There are just some kind of men who – who’re so busy worrying about the next world they’ve never learned to live in this one, and you can look down the street and see the results.” ~Harper Lee

5. “A hundred pounds of sermons on tolerance, or an equal measure of invective deploring the lack of it, will weigh far less in the scale of enlightenment than a mere eighteen ounces of new fiction bearing the title To Kill a Mockingbird.” ~Washington Post Review of her book in 1961

6. “The book to read is not the one which thinks for you, but the one which makes you think. No book in the world equals the Bible for that.” ~ Harper Lee

7. “I wanted you to see what real courage is, instead of getting the idea that courage is a man with a gun in his hand. It’s when you know you’re licked before you begin, but you begin anyway and see it through no matter what.” ~Harper Lee 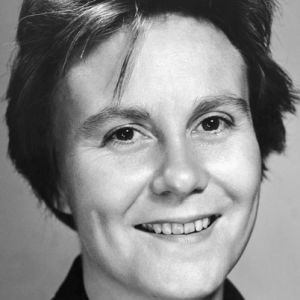 I think nothing quite captures the spirit of Harper Lee than this story below:

In 2006, A young fan asked Harper Lee for her autographed picture, she wrote a letter replying this young fan who had asked for a picture by offering up some advice:

I don’t have a picture of myself, so please accept these few lines:
As you grow up, always tell the truth, do no harm to others, and don’t think you are the most important being on earth. Rich or poor, you then can look anyone in the eye and say, “I’m probably no better than you, but I’m certainly your equal.” 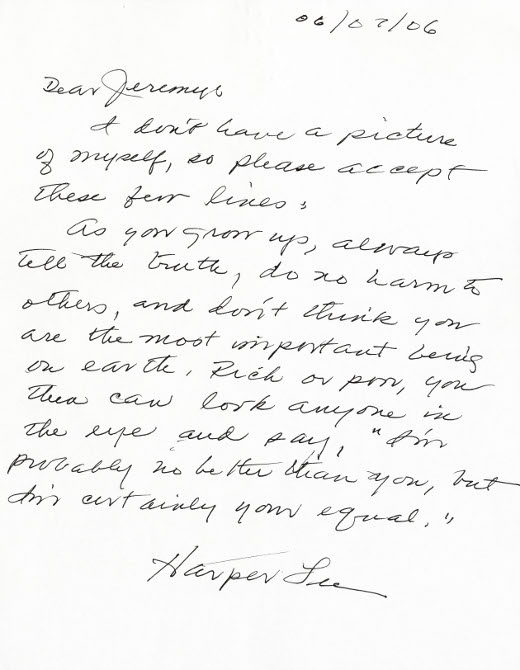