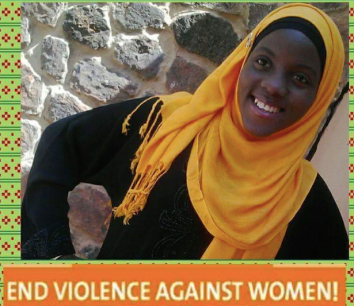 I often define “a poet” as one whose personal emotions, perceptions of happenings around them and conjectures of ideas and myriad emotions, are artistically woven into words, which are then graciously offered to the world. The world is at liberty to interpret it, how it deems fit.

There was a young brilliant girl, (let’s call her Ife), who yearned so much for western education she started basic education and performed excellently, even better than her brothers. However, unfortunately, she was compelled to drop out of school based on her gender.

Eventually married off just as she hit puberty (against her will) to an unloving, old haggard groom, who beats, rapes and thus de-humanizes her -physically, emotionally, psychologically and sexually. Till may continue for months, years, even decades, till she knows no other way and simply loses herself in the process.

Her life becomes one of stolen dreams, a brutalized soul; a sad tale of lost childhood and womanhood.

Ife is always who I refer to, when I think of  victims of “violence against women “.

This is not the story of our female ancestors, rather of many girls and women today, who are denied their human/woman rights, denied the freedom of self-expression, self-discovery, to pursue their passion and so, shut off from self-actualization.

Through poetry, storytelling/folklore, songs, arts, articles etc we capture the incredible stories of women who rose above the challenges in their era. Women such as Queen Amina of Zazzau, Queen Idia of Pre-colonial Benin Kingdom, Yaa Asantewa of Ghana, Hatshepsut of Egypt, Daoma Veroni of Congo, Elizabeth of Toro, Uganda, Dian-Rhea of Madagascar, Efunsetan Aniwura of Ibadan and a host of other exceptional women in the past and even today.

“The channel to women’s emancipation is through economic empowerment. As empowering women educationally is the key to assertiveness and self actualization.”

On this premise, for any woman to be able to play a role in the society she needs to be empowered, and the first form of empowerment is through education (be it formal or informal). This is because education gives you the right mindset, self-worth and esteem, which you can explore to achieving economic empowerment.

I’d like to talk about two notable female poets (who are my heroines), and how their poetry intersected with their advocacy in education and empowerment. They lived centuries apart and yet, shared many remarkable things in common.

Nana Asma’u, the daughter of Usman Ibn Fodiyo (the founder of the Sokoto caliphate), was a fearless warrior, a vast and knowledgeable princess who was well respected by her people for her literary prowess and military strength. She learnt the basic Quranic lessons and advanced religious studies.

She became a renown scholar, historian, a ‘poetry queen’ and tutored many women (including men) of her time. Her female students were appointed to teach women in various communities across the caliphate. She was eloquent in Arabic, Hausa and Fulfulde languages.

Her contributions to knowledge include many religious books and poems written in the aforementioned three languages and are still very strong reference up till today. She represents the true woman with freedom to excel and impact like every human being.

Another great female poet is an African-American, –Marguerite Annie Johnson (Maya Angelou). Also an author, civil rights activist and actress. She was raped at the tender age of 8 by her mother’s boyfriend and when she reported, he was only jailed for a single day, but was murdered four days after his release.

‘Maya was a victim of violence and racism with an inferiority complex which made her into a self-possessed, dignified young woman capable of responding to prejudice. The incident of her rapist’s murder made her mute for almost five years (a sense of self-shame and self-blame often associated with victims).

However, it was during her period of silence that she developed her extraordinary memory, love for books and literature, her ability to listen and observe the world within and around her.’ (Source: Maya Angelou Foundation)

She grew to become a formidable force to reckon with. Her voice spoke for the voiceless and oppressed. Her poems such as “Still, I Rise” and “Phenomenal Woman” was especially to, for and about empowering women.

With both Nana and Maya, Poetry seemed to represent a metaphor (or tool) for freedom and advocacy. It allowed them capture the depth of their experiences and observations of the world around them. Both women were ardent educationists and advocates for women’s rights.

“Poetry, like every art form, can morph into a tool of psychological freedom, from which everything else flows. If domestic violence is about taking away victim’s power and controlling them, then poetry is the opposite, it is about survival and thriving -of re-discovering your voice, your truth, taking back your power, interpreting/reframing events in your life in a new light and ultimately controlling your narrative.” ~Juliet ‘Kego

I often imagine the outcome if Maya Angelou had kept mute beyond those five years after her rape, and/or had never shattered the silence around her horrific experience. How vastly different would her life had been? Education was the force that allowed these women; Maya and Nana, to carry out their advocacy and express their passions, one of which was poetry.

A thorough and well-rounded Education opens the mind up to express its dreams, understand its values and boundaries and live with authenticity. It curbs abuse from the roots; the psychological and emotional space where it begins.

The mantra for one of my advocacy campaigns was themed “Educate the jungle ” – I believe that an uneducated person is like a stray soul, wandering in the jungle, cut off from all civilization and hidden from their light.

Poetry, violence and women. They all fuse somehow. And as we celebrate National Poetry Month, I encourage you to read and share poetry. Recommended poets -Nana Asma’u, Maya Angelou and Warsan Shire is another favourite.

Talk about the poems you read. In giving a voice to words, they stay rooted in minds. And who knows, perhaps a word, phrase, verse, complete poem, may be the spark that awakens women like Ife, who are trapped in abusive spaces, and may inspire them to rise with love and dignity, and embrace the truism that they are phenomenal women…

She was conferred with a distinguished honour (MON) by the National Association of Kwara State students in 2012. In 2014 she was awarded a plaque of excellence after serving as the executive vice president of Junior Chamber International UDUS and Just last year she won the award of the best Editor-in-chief in UDUS after completing a two term as the Editor-in-Chief of PEN press.

She is also a reporter for the Nation Newspaper Lagos on Campuslife. She is an EAG Scholar (Educate A Girl Nigeria). She won an international award from Unilever Future leaders’ league in Asia after her media advocacy campaign “Educate the Jungle” went viral on various social media platforms in December 2015.

She can be reached via on Facebook as: Akanbi Abimbola Halimah.